The Leshen is an experience that is greater than the sum of it’s parts. Formed initially as a recording project to create moving, heavy, instrumental music, The Leshen has established themselves as a live DIY rock ‘n’ roll institution.

Forgoing the traditional pay-to-play style rules of the music biz and forging their own path provides the band with the freedom to create and perform without boundaries. Unhindered by the confines of standard music compositions, ego and expectations the two have forged a crunchy, melodic style of music that’s as much punk rock as it is metal. Early on, during the initial conception of The Leshen, the members opted to eschew vocals and leaned heavily on the use of swirling, layered guitar effects incorporated with noise and sound samples in live performances to create an immersive experience that encourages the listener to draw their own conclusion and story for each song. 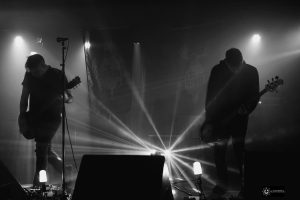 The Leshen released their first EP “The Sharpening” in December 2016 and the “Red of Tooth and Long of Nail” EP in March 2018.

The band has been playing live shows, radio performances and festivals non-stop from initial incarnation and looking forward to 2019 have no plans to slow down.